Good Day For a Swim

Yesterday was my husband’s family reunion.  The night before is spent campfire hopping, making s’mores, chatting, laughing and catching up.  The following day is a swim to an island in the middle of the pond (the family has lots of camps on the pond and my hubby’s parents live there year round), that is followed up by a cook out with tons of pies, so many pies, it is referred to as “Pie Day.”

This may not sound like the kind of event that would be good for someone on any type of diet, and to be honest, I was really nervous about the weekend and how I would survive all the temptation.  All in all I didn’t do too bad.  I did treat myself to a s’more Friday night (it was so worth it, yum!), and made a Weight Watchers recipe for a key lime pie (not a lime fan, so I substituted lemon and it came out so good!)  One of my hubby’s relatives has been on a weight loss journey as well, and she made a points friendly burrito bake that was really yum.  I’ve lost 80 pounds, she’s lost 60, between the two of us, we’ve lost an average sized person!  I most certainly had a few nibbles and tastes here and there that I could have done without.  I usually do pretty well with my initial meal, it’s in cleaning up that I get myself in trouble, which I did a little but not too bad.  I know I have to learn to live with the temptation eventually, and I’m not going to be able to stay 100% good 100% of the time.

My saving grace for the weekend was the swim.  After a map check, we discovered it it .66 miles to the island.  Swimming to the island is something I have never had the desire to try in the past.  This was my 6th pie day and the thought had never crossed my mind in the past.  But I decided this year, it would be a great way to be active and earn back some of the points I knew I would end up eating.

I have never been a strong swimmer.  The extent of my swimming skills doesn’t go much beyond a doggie paddle.  My uncle drown when I was really young and that instilled an even deeper fear of the water in my parents who were never extremely comfortable with it to begin with, so going that kind of distance never crossed my mind.

This year for me has been a lot about conquering fears and accomplishing things I never thought I would, so I decided to go for it.

Heading out for the swim. The cluster of trees way off in the distance, towards the right, is the island we swam to.

It was certainly a slow go for me.  I stayed at the back of the pack the entire swim.  My hubby floated very close by the the kayak so if I needed a break or anything along those lines.  I made it about 3/4 of the way to the island before requesting a noodle to help keep me afloat, but I was determined to keep doing the work myself, so I placed the noodle at my waist and kept kicking and paddling.

I’m fairly certain there was a period of time where I was in fact not making any forward progress, but after what felt like forever, I made it.  My hubby kept asking if I wanted a tow on the back of the kayak and I refused.  I wanted to make it there, on my own, (well, just me and my noodle that is).  There were moments like there are whenever I do any form of exercise where I wanted to quit, or turn around and go back, or stop moving and just float, but I didn’t.  My hubby did end up pulling me the last hundred feet or so because as we got close to the island it got really rocky and I bashed my toe once and was feeling a little panicky, but otherwise, it was all me and noodle. 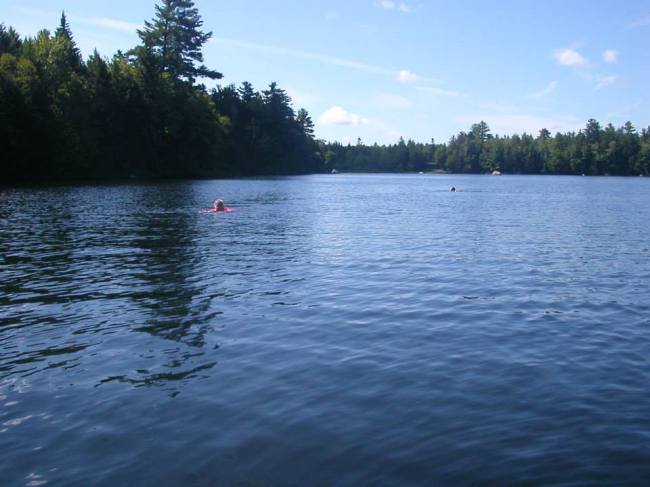 My mother in law was a great help and inspiration.  She stayed close by and would yell back to me every once and a while to make sure I was doing alright and to yell out some words of encouragement.  This was her first swim in several years.  She has pretty severe Chron’s and hasn’t been able to swim that distance the past few summers.  It was also her first swim since her knee replacement surgery and she was amazing!

After a quick picture at the island it was time to turn back.  I can honestly say, I didn’t work nearly as hard on the way back.  I allowed the hubs to tow me a little and spent some time as a figure head for the kayak, but I still put in plenty of effort.

Spending a few restful minutes as the kayak figure head. Look at those calf muscles!

In all, it took about 2 hours there and back.  By the time we got back I was so cold, my hands wouldn’t even work to put a band-aid on my banged up toe (thank you rocks)!  But it was worth it.  It was worth it to prove to myself I could do something I never thought I could, it was worth it to see my mother in law accomplish something she loves and was able to do for the first time in years, it was worth the activity points I earned for the treats I had later in the afternoon, and really it was one of the more fun 2 hours I’ve ever spent exercising, and oddly enough I’m really looking forward to doing it again next year!

Posted by balteri84 on August 5, 2013 in Uncategorized

Here’s to No More Rolls!

Putting things into perspective, the first picture is me the Christmas after my first son was born.  It wasn’t even my heaviest.  When I started losing weight in October, I was probably about 25 pounds heavier.  This picture is one of those where I didn’t think I was as big as some other people I knew, but now I see every bit of the weight I was carrying.

The second picture was taken about a week ago, and to be honest, I’m feeling even better now than I did then!

Posted by balteri84 on August 1, 2013 in Uncategorized